I don’t know too much about the organisation Kickstarter, so I hesitate to be too critical about them, but this morning an item appeared in my Twitter feed about a campaign of theirs which appeared to be taking bad taste to new heights (quite literally).

Kickstarter is an organisation which enables people to crowdsource funding for projects via the internet. Many adventurers use it to solicit donations from the public to fund expeditions. I don’t want to go too deeply into the ethics of this. While it’s clearly open to abuse (for example this man who persuaded people to give him money for a fatbike expedition despite having no previous experience) I’m sure many very worthwhile projects have been funded by it.

More surprisingly, while Kickstarter does have project guidelines, there appears to be no rigorous vetting to decide what projects should be supported on their website. Consequently many questionable projects are using their brand to advertise. Like this one: 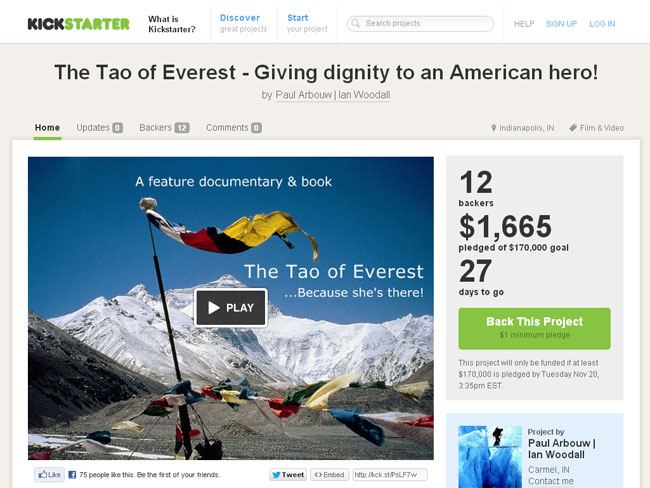 The project page begins with a moving tribute to a climber who died on Everest several years ago, and how the project owner returned to the mountain ten years later, wrapped her body in an American flag and moved it off the route. Fine so far, but halfway down the page, the tone changes completely.

“Hi Kickstarters … The aim of our Kickstarter project is to turn The Tao of Everest’s moving and inspirational story into a feature length film documentary as well as a full color, coffee-table book.”

Hang on a minute?

“The Tao of Everest coffee-table book will be high-end case bound, full-color throughout, have a full-color dust jacket, and use the finest 170gsm art paper … So Kickstarters, we hope that you will take advantage of our fantastic selection of rewards … and join us on our inspirational journey to the top of the world!”

Reading this I feel like someone who has just walked for days through an inspiring remote landscape only to cross a high pass and see a McDonald’s theme park in the next valley.

The project page goes on to explain:

“In order to offer the most authentic interpretation of the story our aim is to return to both the north and south sides of Mt Everest during 2013 and film the events of the story in the actual locations they occurred, including, conditions allowing, the summit itself.

While we are filming on the mountain we will also have the opportunity to bury an Indian climber who has been lying exposed at 26,000ft on the mountain for the past twelve years, and give him the dignity he deserves.”

In order to complete the project, all they need is the small matter of $170,000 from you the public. Well, of course they do, that’s how much a full-scale expedition to the summit of Everest costs.

True, it’s long overdue for somebody to move the Indian climber now known as Green Boots off the mountain, as he’s been lying there for 16 years in fact (he died in 1996) and I sat down next to him earlier this year without realising he was there, but please don’t make the mistake of thinking they’ll be giving him a dignified burial. Sorry to sound disrespectful, but a more likely scenario is that they’ll simply push him down the North Face, as that’s pretty much all you can do at 8500m when you’re exhausted.

I wonder what the families of the victims feel about this project, and whether they have given it their blessing. Is it really about providing dignity for those who have died, in which case why not just provide a simple base camp memorial? Or is it in fact the absolute reverse: would-be adventurers cynically using the dead to fund their own Everest trip? At the very least they should seriously reconsider the tone of their marketing.

I’ll leave you to decide. I think I’ve said enough, but I feel like I’m going to be sick.